As It’s Christmas I thought I’d share this popular piece with you again. It requires little explanation other then to say it is all true!

If you are a new visitor to this site and would like to know when I post new pieces of my writing, do fill in the form to receive my newsletters. For signing up you will also get my short story ‘Work Life Balance’.

I hope you enjoy reading my recollections about Father Christmas and enjoy your Christmas too. 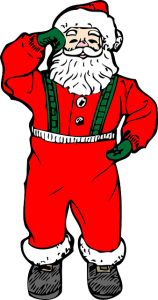 It was our family tradition to gather together early in December and prepare our Christmas wish lists. My brother, sister and I would carefully write our lists and hand them over to Mum and Dad to be checked. Then we threw the lists into the fire and let the smoke carry them up the chimney to waft away to Father Christmas.

One December Sunday, I decided to approach these Christmas preparations differently. My parents were always encouraging me to be independent, so I had an idea. My older siblings were out –  being very independent – and my parents were busy. I decided to go it alone and do my own letter to Father Christmas.  I devised my list in my best handwriting, checked the spellings and up it went in a puff of smoke.

Later that day Mum and Dad suggested it might be a good time for me to do my letter to Father Christmas.

‘No need. All done.’ I proudly announced, displaying my extraordinary independence.

‘What?’ Dad looked rather puzzled.

I explained – slowly, so he could catch up.

‘I did it this morning. Wrote it out. Sent it up the chimney. As usual.’

While they gradually grasped this reality, I awaited their congratulations. How independent of you! Well done! That kind of thing. But all I got were questions. How long was it? What did it say? What did I want most?

As a very independent type of person, I had no desire to share such details.  Then my father had a further question.

‘What about the spelling?’

‘The spelling. If there are any mistakes, Father Christmas won’t understand it.’ My father was warming to his theme now. ‘To be on the safe side you’d better do another.’

‘Yes,’ my mother chimed in, with utter relief. ‘That’s a good idea. Let’s do another!’

Clinging to my independence, I declined this suggestion. Pointing out that not only had I specifically checked the spelling, but Father Christmas was probably the one person who could be relied upon to untangle children’s’ spelling mistakes. Not that there were any.

They pressed the point a bit further and I dug in even deeper. I couldn’t believe it. Why wasn’t I getting some credit for having shown such initiative?

Then I had a thought. If I did another list, maybe I’d get both lots of gifts.  I dutifully went to fetch my pen and paper.

Another Christmas tradition lay in the presentation of our presents. My brother, sister and I had separate bedrooms. On Christmas Eve, when Father Christmas eventually visited, he left a pillowcase filled with presents at the bottom of each of our beds. The joy of waking up on Christmas morning to find that pillowcase crammed with gifts! The best day of the year. I’d usually wake really early, open all my presents, then seek out my siblings or go and greet my parents.

This year was no different. I‘d had a great selection of gifts. Those from Aunts and Uncles and family friends were wrapped. I gleefully ripped off the paper, carefully keeping the labels as a prompt for my Thank You letters. Then there were some presents without wrappings. I knew these were the ones from Father Christmas. I checked them out. The list had worked!

Delighted with this great haul, I went to my parents’ bedroom and reported all. I excitedly went through my list of acquisitions, then hesitated a little. Should I say something? Mum spotted my look of concern and asked what the matter was. I decided to go for it.

‘It’s just that…,’ I tentatively began, ‘Everyone else has given me presents, and I’ve had lots from Father Christmas, but you haven’t given me anything.’  That familiar look of parental puzzlement reappeared. Once again, I repeated everything slowly and clearly to stimulate understanding. Mum and Dad exchanged questioning glances, looked at me, then back at each other. Total silence. Then Dad had another brainwave.

‘The thing is Dear, the presents without wrappings, the ones from Father Christmas, they are actually from us. Because we sent him the money for them.’  Mum nodded enthusiastically.

My turn to look puzzled. I wasn’t particularly perturbed about how they paid him. A cheque up the chimney, I assumed. But I did wonder about the why.  Why go to all that trouble? They could have simply bought everything at W H Smiths in Kidderminster, where they got everyone else’s.

Even at my young age this method of present sourcing didn’t make sense. And that was way before we all began to worry about such things as sustainable supply chains. Today we’d question the enormous carbon footprint Father Christmas must create: all those Sleigh Miles. And what about Reindeer Welfare – the weight of all those presents!

No, even back then it didn’t make sense. But I decided to let it go. After all, it was Christmas Day and I didn’t want to spoil their fun.