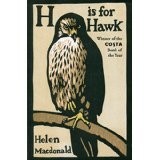 This is one of the best books I’ve ever read: beautifully written, moving and informative. The story is rather unusual – the training of a goshawk – but its many layers cover themes that are common to us all.

Helen Macdonald takes us through her experience of ‘manning’, a goshawk. She covers the whole process from first meeting the young goshawk – she calls her Mabel – learning how to handle her and finally seeing her in full flight hunting for prey. It is a fascinating account and full of wonderful descriptions.

As Macdonald acknowledges, her focus on taming the hawk was her way of dealing with the death of her father. She gives a very honest account of her grief as she pieces together memories of her father and her childhood. These memories, captured in the photos her father took, symbolise both what it is to be human and the transience of life.

Another influence in Macdonald’s life was TH White, author of The Goshawk. Whilst his efforts at falconry, described in that book, ended in failure Macdonald empathises with him. She can see how White’s lack of love in childhood affected his relationship with Gos, his hawk. Like so many people of his time, White viewed Gos as a symbol of warfare. He viewed himself as a dominating dictator, albeit an ineffective one, and admitted feeling blood lust when Gos killed a rabbit. Macdonald sees things quite differently, thanks partly to her loving upbringing.

In cutting herself off from friends and family in her grief, Macdonald says that in some ways she became like a hawk herself. This gave her a unique perspective on humanity and nature. From the start the wildness and violence of ‘the murdering hawk’ is clear. The terror of the hawk, tied with leather jesses or trapped inside the house is quite disturbing. On a lighter note, seeing the world through a hawk’s eyes, Macdonald appreciates how irrelevant traffic lights or joggers must seem.

As Mabel’s training continues we get a further sense of how man dominates much of nature. Macdonald recognises that many people do object to controlling birds of prey in this way. But there is no doubt that she cares very much for Mabel and is highly protective of her. When Mabel flies freely Macdonald is in absolute dread of her failing to return.

Macdonald reflects on nature and our impact upon it, including the part we are playing in species extinction.  She sees how life, death, nature and being human are all connected. We play both a major and a minor part in it all – but we are certainly not superior. Indeed at one point Macdonald sees Mabel in hunting mode as ‘bigger and more important than us’.

Whilst we humans ponder over the past and fret about the future Mabel is entirely focused on the present. On the kill. What it means to hunt and kill becomes a fundamental question.

In one powerful description Macdonald starts killing the rabbits Mabel has caught to save them from being eaten alive. Macdonald realises that she cared both about the rabbit and about Mabel. She accepts that there is sorrow in all death; but sad as it might be, the rabbit’s death is part of Mabel’s life.

To us humans, in this country at least, hunting is very much connected with privilege and tradition.  Warfare adds to our confused attempts to justify killing others.  However, Mabel’s motivation is not a defence we can call upon. We are not hawks. We are humans.  As Macdonald puts it so well:

“Goshawks are things of death and blood and gore, but they are not excuses for atrocities. Their inhumanity is to be treasured because what they do has nothing to do with us at all.”