‘What Happened’, by Hillary Rodham Clinton – A Review 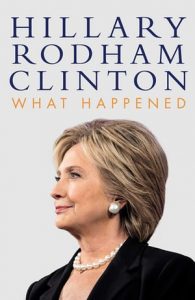 In ‘What Happened’ Hillary Rodham Clinton sets out what went wrong – and why – in her campaign to become the first female POTUS. It’s a fascinating read. Like many, I was shocked that she lost. Since then, I have been further shocked by the number of Americans who have told me how much they really didn’t like her. This was news to me, so I was doubly interested to see how she came across in the book.

Clinton gives many reasons for her loss. Here they are, in no particular order.

One aspect she couldn’t alter was the challenge of following on from Obama. It is extremely rare for a US political party to win a third consecutive term in office. She had been part of Obama’s administration and it was not viable for her to jump on the bandwagon demanding change (nor did she want to).

During the primaries and the Presidential race itself, the demand for ‘change’ and similar simplistic sound bites were often heard. These were highly effective rallying cries, but what did they mean? ‘Change’ sounds good but can be an empty promise. Clinton emphasises that she focused on detailed policies as she wanted to ‘Put policies back into politics’. But in today’s world – especially with social media – getting such detailed messages across is not easy. The headlines and bumper stickers win the day.

Another challenge in getting heard was overcoming the morass of coverage lined up against her. The airwaves were awash with attacks and allegations.   The most famous, and perhaps most damaging, was the emails scandal. Clinton accepts that using private email instead of official channels, ‘for convenience’, was ‘a dumb mistake’. But, she argues, the criticism was out of all proportion. Three times as much airtime was given to coverage of those emails than all her policies combined. Then, despite being cleared of any wrongdoing, just a few days before the election, FBI Director Jim Comey announced that the investigation was to be reopened. The day before the election he confirmed that there was no new evidence against Clinton, but the damage was done. The email scandal dominated the news throughout election week. The polls show that this was a significant factor in the last minute switch in voter attitudes that reversed Clinton’s lead.

This late switch in support was also influenced by the Russian interventions. As well as hacking into the Democrats’ databases, the Russians posted thousands of fake reports on social media, all against Clinton.  These were read by millions of voters. Comey, more than happy to publicly announce his investigations into the emails, refused to comment on the allegations of Russian interference. A devastating double standard.

It remains to be seen if Trump was in collusion with the Russians. Certainly, Trump is a fan of Putin and both hit hard at Hillary. Trump’s attacks on Clinton were typical of his tactics. Trump responds to any criticism by diverting attention and vilifying others. His cries of ‘Crooked Hillary’ continue today. This brash behaviour attracted much publicity – and millions of votes. Such populist appeal fuelled deep resentment of ‘others’, leading to lasting divisions in US society. 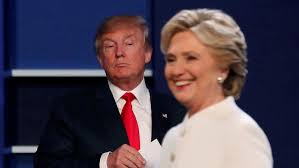 Contrasting personalities were clear to see and seemed to favour Trump.  Clinton tended to ‘listen’, Trump preferred to ‘loom’.  The ‘Lock her up’ chants, the sexist and misogynist rants, all went unchecked, yet the slightest oversight or ill-judged phrase by Clinton would be widely and utterly condemned.

These personality traits perhaps reflect gender –yet another factor. Despite the huge steps women have taken in recent years, the journey is far from over. Clinton points out that it is still hard for women to gain positions of power. Whilst parliaments might elect a woman who the members have come to know, presidencies are very different. Domineering men are more likely to be seen by the masses as ‘right’ for the job. Women have an impossible tightrope to walk. If they show caution they are ‘cold’. If they show emotion they are ‘weak’. And so it goes on

To some, Clinton is elitist and uncaring. In ‘What Happened’ she sets out the considerable help she has given to others and the numerous causes she has supported over the years. Countless people bear witness to her good works. But somehow that message failed to get across. Yet, as Clinton adds, she couldn’t have been that hated, as she did win the popular vote by three million. It was the Electoral College that ultimately stood in her way.

Of course, this is Clinton’s side of the story and I haven’t studied the counterarguments that convinced so many.  But I did find this account a very persuasive picture of someone highly qualified for office and keen to do good. So, what happened? Some see the book as a list of excuses; I see it more as an honest and reflective list of reasons.

Whatever your views of Hillary, there are many complex reasons why she lost. Some are inevitably personal to her. But take those away and we are still left with fake news, Russian interference, massive media bias, cyber warfare, voter suppression and more.  These factors are a real threat to democracies everywhere and they aren’t going away. Sadly, nor is Donald Trump.

I strongly recommend this book. Let me know what you think.